Coel Hen or Coel the Old, the son of Tegfan, was a Celtic ruler who lived around the turn of the fourth and fifth centuries at the time of the departure of the Roman legions from Britain.

He imposed his power over a large area of the country, Coel's territory extended over the whole of the north of England from a line joining Chester and Wash and up into what is today southern Scotland. Coel's association with the north of Britain has led to the suggestion that he may have been the last of the Roman Duces Brittanniarum with his headquarters at York. 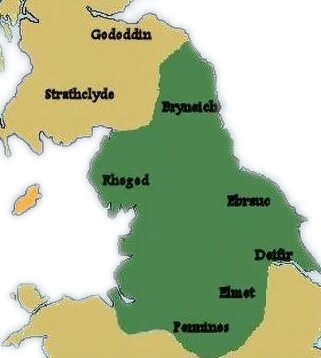 Geoffrey of Monmouth's 'Historia Regum Britanniae' (History of the Kings of Britain) cites Coel as the King of the Britons following the reign of King Asclepiodotus. According to Geoffrey, Coel, annoyed by Asclepiodotus's handling of the Diocletianic Persecution, the last and most severe persecution of Christians in the Roman empire, started a rebellion in Caer Colun (most likely Colchester). He clashed with Asclepiodotus in battle and killing him, assumed his title of high-king of Britain.

According to the Harleian genealogies and the later genealogies are known as the Bonedd Gwyr y Gogledd (The Descent of the Men of the North), Coel Hen was married to Ystradwal, the daughter of Cadfan, and was the ancestor of several lines of kings in the Hen Ogledd or "Old North", the Brythonic Celtic speaking part of northern England and southern Scotland. His descendants, known as the Coeling, included Urien of Rheged son of Cynfarch Oer, Urien, a late sixth-century warrior king of North Rheged, of whom the Welsh Triads list as one of the "Three Great Battle-leaders of Britain". Other descendants of Coel include Gwallog, possibly king of Elmet; the brothers Gwrgi and Peredur; and Clydno Eiddin, king of Eidyn or Edinburgh. He was also thought to be the father-in-law of Cunedda, founder of the kingdom of Gwynedd in North Wales, by his daughter Gwawl. The genealogies bestow the epithet Godebog, on Coel meaning the "Protector".

In the fourth century AD, the predominant race in northern Scotland were the Picts, the name was coined by the Romans who referred to them as 'Picti' meaning 'painted ones', which referred to the Pictish custom of either tattooing their bodies or covering themselves with warpaint. The Irish referred to them as Cruithni, meaning "the people of the designs". What they called themselves has gone unrecorded. During Coel's time the Scotti, Gaelic Celts from Ireland under the leadership of Fergus, king of the Dalriada, began to settle the west coast of Scotland around Argyle.

Coel Hen, fearing if the Picts and Scots united they would represent a dangerous threat to the Celts of Britain, dispatched raiding parties across the northern border to cause discord between the two, they stole the cattle of the Scotti and promptly blamed the Picts for the theft. The plan did not however produce the desired effect, as the Picts and Scots saw through the deception and Coel's efforts seem to have succeeded in uniting them, leading to an invasion of the British Kingdom of Strathclyde (Ystradclud).

Coel marched north to expel the Picts and Scots from Strathclyde, who fled before his advance to the hills of lowland Scotland. He set up a camp at what was later to become Coylton in Ayrshire.

Before long, the starving Picts and Scots made a desperate attack on Coel's camp. Coel was taken by complete surprise, and the British forces fled. Wandering through remote territory after the attack, Coel became trapped in a bog at Coilsfield, in Tarbolton, Ayrshire, and drowned. Coel's death is recorded by Anglo-Saxon chroniclers.

He was first buried in a mound there before his body was translated to the church at Coylton. Following his death, Coel's Northern Kingdom was divided between two of his sons, Ceneu inherited the kingdoms of north-eastern and midland Britain and Ghorbanian became king of Bryneich, which was later conquered by the Angles, who called it Bernicia. Another son was thought to be Meirchawn whose uncle Mor and cousin Morydd were thought to be father and brother of Merlin. By about 616, the Cole dynasty was eventually wiped out by the Vikings and Saxons.

A later medieval legend tells of a Coel, who was the father of Saint Helena and the grandfather of Roman Emperor Constantine the Great. Other similarly named characters may be confused or with the Welsh Coel. Coel Hen may be the 'the merry old soul' for the children's nursery rhyme "Old King Cole".

The Battle of Mount Badon PreviousNext The Kingdom of Rheged