Ambrosius Aurelianus, known to Welsh as Emrys Wledig, was High King of the Britons after Vortigern. Our information regarding him is however, often obscure, clouded and contradictory and fact and legend have become inextricably intertwined. 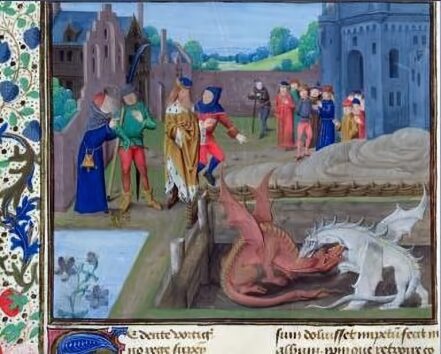 He was said to have been brought up in Brittany with his brother Uther Pendragon, the father of the legendary King Arthur, to avoid the usurper Vortigern, and on reaching manhood, returned to Britain and defeated the high-king Vortigern, Ambrosius then warred successfully against the Saxons and in AD 488 slew their leader, Hengist, King of the Cantware in modern Kent.

Ambrosius Aurelianus is first referred to in ' De Excidio et Conquestu Britanniae', written in the sixth century by the Celtic monk, Gildas, who informs us that Ambrosius led the Celtic resistance against the invading hordes of Anglo-Saxons and heartened his countrymen by his own courage.

Ambrosius may have been responsible for the construction of the Wansdyke, a series of defensive linear earthworks in the West Country dating from the Dark Ages, roughly between 400 and 700 AD. The dyke runs from the Avon valley south of Bristol to Savernake Forest near Marlborough in Wiltshire.

Gildas tells us that the Britons won a substantial victory over the Saxons at Mons Badonicus (Mount Badon), which is thought to have been fought circa 496, which established a period of peace for the Britons. Several locations have been put forward as the possible site of the battle. Archaeological evidence confirms a sudden cessation of Saxon advances in the south until the mid-sixth century.

Gildas relates several snippets of lore about Ambrosius, including the story about Ambrosius, Vortigern, and the red and white dragons beneath Dinas Emrys, the "Fortress of Ambrosius" a Dark Age fortress near the village of Beddgelert in the mountains of Snowdonia. Where Merlin is said to have prophesied how the White Dragon of the Saxons, though winning the battle at present, would soon be defeated by the British Red Dragon. After the downfall of Vortigern, the fort of Dinas Emrys was given to Ambrosius Aurelianus. 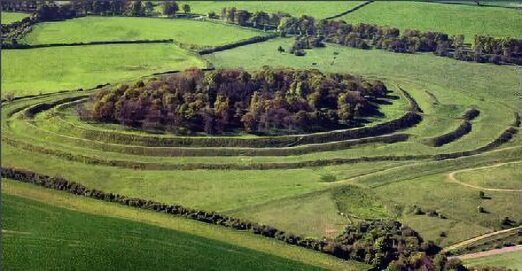 Ambrosius is also mentioned in The Venerable Bede's 'History of the English Church and People', Bede was an eighth-century monk of the monastery of Jarrow who refers to Ambosius as "Ambrosius Aurelius, a modest man of Roman origin, who was the sole survivor of the catastrophe in which his royal parents had perished." Bede informs us that "under his leadership, the Britons took up arms, challenged their conquerors to battle, and with God's help inflicted a defeat upon them."

Nennius, a monk of Bangor, compiled the "Historia Brittonum", in the early ninth century, he appears to write about two different Ambrosius'. He refers to Ambrosius as being an orphan who displayed prophetic powers before Vortigern. He also informs us that Ambrosius was a rival whom Vortigern dreaded, and, in a later passage, refers to him as "the great king of all the kings of the British nation."

Geoffrey of Monmouth links him with the wizard Merlin in his fanciful "History of the Kings of Britain". He states that when King Constans was murdered by the usurper, Vortigern, Ambrosius and his brother, Uther Pendragon, were smuggled to Brittany to return to campaign against Vortigern. In time, Ambrosius defeated Vortigern, battled successfully against the invading Saxons and had their leader, Hengist, killed. Geoffrey also names him as one of three sons of Constantine III, along with Constans II and Uther Pendragon. According to Geoffrey, Vortigern's son, Paschent, eventually had Ambrosius poisoned.

It has been suggested that Amesbury in Wiltshire might preserve in it the name of Ambrosius, the name probably means 'the fort of Ambrosius' and Amesbury, whichis referred to as as 'Ambresbyrig' in a charter of 880,may possibly have been his power base in the later fifth century.