The Battle of Stoke Field

The Battle of Stoke Field was the last battle of the dynastic conflict known as the Wars of the Roses. A Lancastrian king, Henry Tudor, had won the throne two years previously, after his victory over the Yorkist King Richard III at the Battle of Bosworth, he now faced a new threat, an attempt by leading Yorkists to unseat him in favour of the pretender Lambert Simnel.

The arms of Henry VII 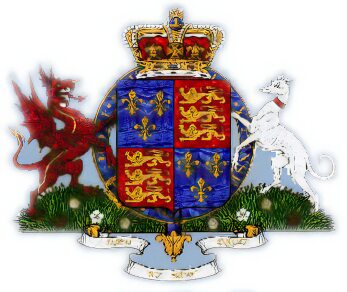 Lambert Simnel claimed to be Edward, Earl of Warwick, the son of George Duke of Clarence, and the nearest male heir of the Yorkist line, and had been coached in this role by Richard Simons, an Oxford priest. Henry VII had paraded the real earl of Warwick through the streets of London on 17th February 1486 but to no avail. 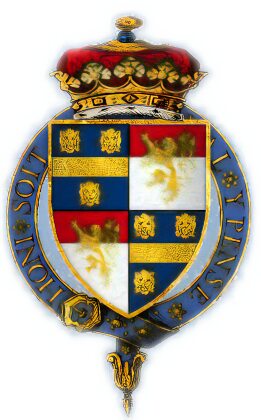 The Battle of Stoke Field was the last battle of the dynastic conflict known as the Wars of the Roses. A Lancastrian king, Henry Tudor, had won the throne two years previously, after his victory over the Yorkist King Richard III at the Battle of Bosworth, he now faced a new threat, an attempt by leading Yorkists to unseat him in favour of the pretender Lambert Simnel.

Lambert Simnel claimed to be Edward, Earl of Warwick, the son of George Duke of Clarence, and the nearest male heir of the Yorkist line, and had been coached in this role by Richard Simons, an Oxford priest. Henry VII had paraded the real earl of Warwick through the streets of London on 17th February 1486 but to no avail.

John de la Pole, Earl of Lincoln, the son of Edward IV's sister Elizabeth of York, (whom King Richard III had named as his heir after the death of his son, Edward of Middleham) determined to use Simnel to stir up trouble for the new Tudor king, whose grip on the crown of England was not yet secured.

Although he had been reconciled to King Henry VII after Bosworth, de la Pole fled from the English court on 19 March 1487 and sought refuge with his aunt, Margaret, Dowager Duchess of Burgundy at the court of Mechelen. The Duchess Margaret had since the death of her husband, Charles the Bold, continued to wield great influence in Flanders. Determined to be a thorn in the side of her brother's supplanter, she provided her nephew de la Pole with financial and military aid, in the form of around two thousand German troops under the command of Martin Schwartz, a German mercenary captain.

Lincoln was joined by several die-hard Yorkist Lords at Margaret's court, including Richard III's loyal supporter, Francis Lovell, 1st Viscount Lovell, who had escaped the field after the death of Richard III at Bosworth and took sanctuary at Colchester, and had gone on to lead a revolt in Yorkshire which had attempted to seize Henry VII. Sir Richard Harleston, the former governor of Jersey and Thomas David, a captain of the English garrison at Calais, also joined De la Pole. Together they set sail for Ireland, where the Yorkist cause was favoured, to gather more support.

Embarking in Dublin on 4 May 1487, with aid obtained from Gerald FitzGerald, 8th Earl of Kildare who Henry VII had refused to confirm in his office of Lord Deputy of Ireland and his brother Thomas FitzGerald of Laccagh, they recruited around 4,500 Irish mercenaries. In a propaganda campaign, De la Pole had the pretender Lambert Simnel crowned as "King Edward VI" in Dublin on 24 May 1487, after which he set sail for England.

Landing on 4 June 1487 at Peil Island near Furness on the coast of Lancashire, on their first night in England the Yorkist army camped by the town of Ulverston on the coast of Cumbria where Sir Thomas Broughton swelled their ranks with a further force of recruits. The Yorkist army now consisted of around 8,000 men.

The mayor and burgesses of the city of York refused to surrender and admit the rebels, which forced them to swerve south toward Tadcaster, were they were joined by Sir Edward Hastings and Sir Robert Percy of Scotton.

On the night of 10 June, at Bramham Moor, outside Tadcaster, Lovell led a night attack against a Lancastrian force under Lord Clifford, the son of the notorious 'Butcher', Sir Henry Clifford, who had followed them to the moor. The Yorkist gained a minor victory, capturing much of Clifford's equipment, Clifford himself was forced to flee for his life.

King Henry VII himself had established his headquarters at Kenilworth and left the castle five days after the rebel force had landed. He marched his army to Coventry, then Leicester and then on to Loughborough, where he received news of the rebel advance and continued to Nottingham. At Nottingham, he was joined by Stanley's force, under Lord Strange, a survivor of the Battle of Bosworth. At this point, evening on Thursday 14th June, the rival forces were barely a dozen miles apart. Some captured scouts or spies were strung up from an ash tree, at the southern edge of the river crossing.

De la Pole then outmanoeuvred King Henry VII's northern army, commanded by Henry Percy, Earl of Northumberland, by ordering a force under John, Lord Scrope and Sir Thomas of Masham to mount a diversionary attack on Bootham Bar, in York, on 12 June. They demanded the city gates be opened in the name of 'Edward VI'. The citizens of York sent messengers requesting aid from the Earl of Northumberland, who swung his force around marched north to York. Lord Scrope then withdrew northwards, with Northumberland's force in pursuit.

De la Pole and his army continued to march south, they encountered Lancastrian cavalry under the command of Edward Woodville, Lord Scales outside Doncaster, after three days of skirmishing in Sherwood Forest, he forced Scales back to Nottingham, where he decided to await the arrival of the main royal army. Henry VII joined Scales at Nottingham with substantial reinforcements on 14 June. Further reinforcements were brought by Rhys ap Thomas, Henry VII's leading supporter in Wales. Henry's two principal military commanders were his uncle Jasper Tudor, recently created Duke of Bedford and the staunch Lancastrian, John de Vere, 13th Earl of Oxford.

Plan of the Battle of Stoke Field 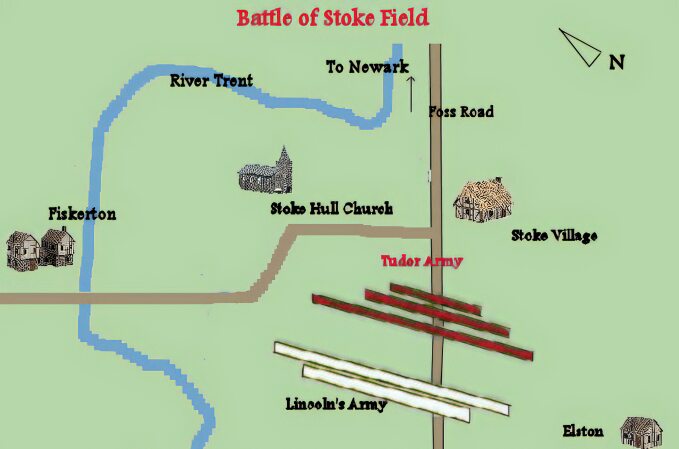 On 15 June, after receiving news that Lincoln had crossed the Trent, the Lancastrian army moved northeast toward Newark.

At about nine in the morning of 16 June, King Henry's forward troops, commanded by the Earl of Oxford, an able and experienced general encountered the Yorkist army who were deployed in an advantageous position on the top of Rampire Hill where the River Trent forms a loop at the village of East Stoke as it flows between Nottingham and Newark, the ford at Fiskerton lying some 4 miles to the south of Newark.

The royal army was divided into three divisions, of which the Earl of Oxford, who had fought at Bosworth, led the vanguard. Martin Schwarz may have begun battle by ordering his crossbowmen and hand gunners to fire, the Lancastrians responded with the launch of a deadly hail of arrows, which caused the Yorkists to give up their commanding position on the high ground to surge forward in an attack. Although the vanguard was shaken, Oxford rallied his force and continued to push forward.

The battle raged fiercely for over three hours, although de la Pole's German mercenaries were equipped with the latest handguns, the large numbers of archers in the Lancastrian army proved to be decisive. The longbowmen were able to shoot volley after volley into the Yorkist position. The Irish troop's lack of sufficient body armour resulted in their being cut down in large numbers by the Lancastrian arrows.

The Yorkists finally broke and fled towards the River Trent down a ravine, known locally as the Bloody Gutter, in which they were killed in large numbers.

The Yorkist leader's John de la Pole, Fitzgerald, Broughton, and Martin Schwartz, were all slain in the fighting. Francis, Lord Lovell alone escaped, reported to have been seen swimming the river on horseback, he was never seen again after the battle. In the eighteenth century, a skeleton was discovered within a secret room when a new chimney was built at his home at Minster Lovell in Oxfordshire, leading to the conjecture that he had hidden there and died of starvation.

The pretender Lambert Simnel was captured but was pardoned and put to work in the royal kitchens. The Irish nobles who had supported Simnel were also pardoned.