A tour of Hastings battlefield and Battle Abbey

The epic battle of Hastings

The epic battle of Hastings, probably the most famous in English history, was fought on 14 October 1066, between the Norman-French army of Duke William of Normandy and an Anglo-Saxon army under the command of King Harold II. The battle took place around 7 miles (11 kilometres) northwest of the market town of Hastings, near the present-day town of Battle in East Sussex.

The battlefield was located between two hills, Caldbec Hill to the north and Telham Hill which lies to the south. The terrain was at that time heavily wooded, with a nearby area of marsh. The Anglo-Saxon Chronicle refers to Hastings as the battle 'at the hoary apple tree'. Within the space of forty years, the battle came to be known as "Senlac", a Norman-French derivation of the Anglo-Saxon "Sandlacu", meaning "sandy water". The battle had already come to be known as "Bellum Hasestingas" or the Battle of Hastings by 1087, during the time of the compilation of the Domesday Book.

The route taken by the Anglo-Saxon army to the battlefield is not known with precision. Several roads are possible candidates, the old Roman road that ran from Rochester to Hastings remains the favourite, due to a large hoard of coins being discovered near there in 1876. 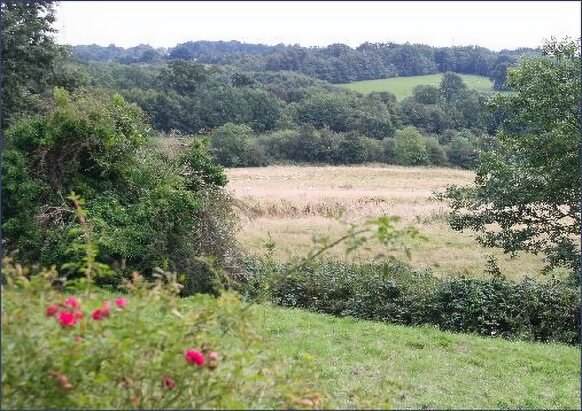 It is thought that King Harold's forces occupied the summit of Caldbec Hill, the rendezvous site of the local Sussex militia and the main Anglo-Saxon army which had marched hurriedly south from their defeat of a Norwegian army at the Battle of Stamford Bridge on receiving news of William's landing at Pevensey. The Saxon army then advanced to Senlac Hill, about a mile away, to meet the invading Norman forces in battle. The Saxon flanks were protected by woods and a stream and marshy area which lay in front of them. The English army deployed the shield wall defensive tactic, with their front ranks holding their shields close together or just overlapping to provide protection from the Norman uphill attack. The consensus of modern historians is that the two opposing armies were around equal in number. 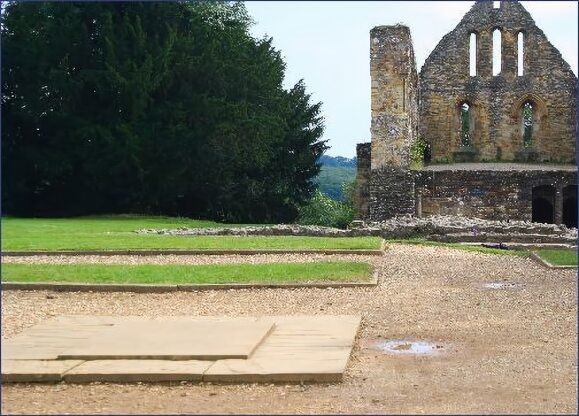 William of Normandy positioned his forces in three groups before the battle, the left division consisted of Bretons, along with forces from Anjou, Poitou and Maine. This division was placed under the command of Alan the Red, a relation of the count of Britanny. The centre, consisting of the Norman contingent, was led by Duke William himself. The right division of the Norman army consisted of Frenchmen and Flemings and was led by William fitzOsbern and Count Eustace of Boulogne. The Norman front lines were composed of archers, behind which were positioned a line of foot soldiers. William's strategy was to open battle with his archers thereby weakening the enemy with arrows. The infantry would then engage the enemy in close combat and create openings in the Anglo-Saxon shield wall which could then be exploited by the cavalry to break through the shield wall.

Stone commemorating the fusion of the English peoples at Battle Abbey 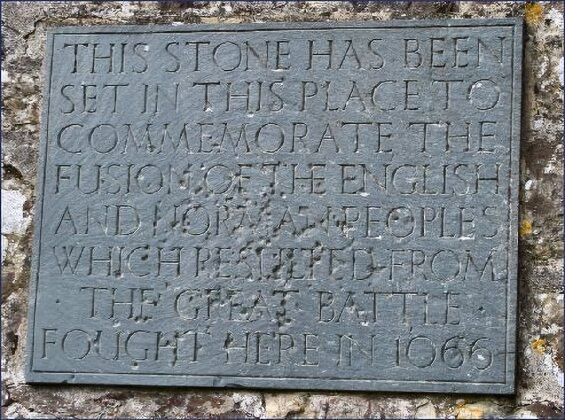 A contemporary account of the battle, known as Carmen de Hastingae Proelio (Song of the Battle of Hastings), is thought to have been written soon after the battle by the Norman, Guy, Bishop of Amiens. This version relates that King Harold met his end at the hands of four knights, after which his lifeless body was hacked at and dismembered. Some thirty years later, Amatus of Montecassino's wrote his L'Ystoire de li Normant (History of the Normans), which records the first instance of Harold being hit in the eye with an arrow.

Accounts of the battle which follow relate to either one or both of these versions. The Bayeux Tapestry was probably commissioned by William's half-brother, Odo, Bishop of Bayeux, who was present at the battle. The tapestry depicts the story of the Norman conquest, a figure depicted in one of the panels in the tapestry is headed with the inscription "Harold Rex Interfectus Est" (Harold the King is killed) and contains an illustration of a figure who grips an arrow that has struck him in the eye. However, some modern historians have questioned whether this armoured figure was indeed intended to be Harold by the tapestry's creators, or if indeed Harold was intended to be another figure in the panel which lies prone in the depiction and is being trampled beneath a horse's hooves. Harold's body was said to have been buried on the battlefield, but William later had his remains moved by to nearby Waltham Abbey.

Interior of the Norman remains of Battle Abbey 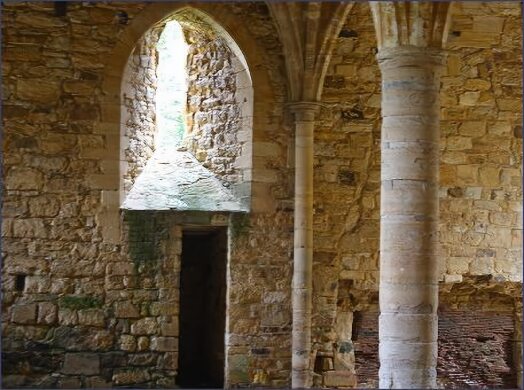 A recent investigation carried out by Tony Robinson and Channel 4's Time Team programme has left researchers convinced the battle took place, not at the traditional site of the battle abbey but on a road junction, near the town of Battle.

After carrying out an aerial laser survey, they concluded that the hill would have been the most likely place for the two armies to have met, rather than the 'boggy' terrain of the official 1066 battlefield. Time Team carried out archaeological digs on the battlefield and nearby at Caldbec Hill, an alternative battle site. No archaeological evidence was unearthed at either site to prove without a doubt where the battle took place. English Heritage, who own Battle Abbey and the 1066 battlefield, have made the point that less than one percent of the battlefield was excavated during the investigation. They dispute the claim that a new battlefield has been discovered, pointing out the 'new' site is just an extension of the official battlefield. 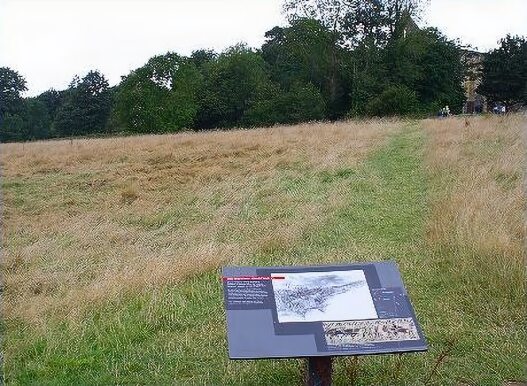 A respected battlefield archaeologist, Dr Glenn Foard, of the University of Huddersfield, plans to return to the site of the battle, in an attempt to unearth the remaining archaeological remains of the battle. Dr Foard, with the aid of English Heritage, is planning a project designed to unearth any remaining material remaining from the battle site. The first stage of the excavations is expected to take place in the spring of 2015. These will consist of removing the top layers of soil from a substantial area of the battlefield, eliminating modern artefacts. A search for genuine remains from the battle of Hastings would then commence. Dr Foard, an expert in battlefield archaeology, has formally determined the true location of the medieval Battle of Bosworth. 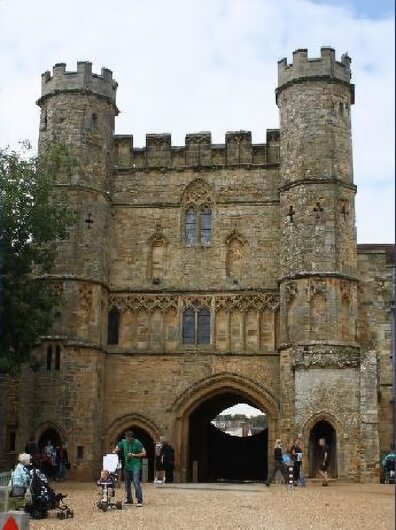 Battle Abbey was founded by William the Conqueror to commemorate the battle and to honour a vow he made before crossing the channel to establish a monastery if God granted him victory. The high altar of the abbey church was said to have occupied the spot where Harold met his end and is now marked by a commemorative stone. On his death, William the Conqueror left several bequests to his foundation which including his cloak and a portable altar which he had used on his many campaigns. He endowed the Abbey so generously that it was to rate among the most prosperous religious houses in England in the proceeding centuries. Only the ruins remain to today of the original Norman building but its impressive gateway, which was constructed in 1338, dominates the southern end of the characterful Battle High Street.

The Abbey now features a new visitor centre, '1066: The Battle for England', which uses modern technology and interactive displays to provide a vivid and imaginative portrayal of events that led to the Norman conquest of England. The exhibition also features a short film. The new building houses a stylish cafe serving light refreshments.