Margaret 'the Maid of Norway'

On the death of Alexander III, whose sons Alexander and David had predeceased him, the king's only surviving descendant and the recognised heiress to Scotland were Margaret, known as the Maid of Norway. She was the daughter of Erik II of Norway and Alexander's only daughter, Margaret of Scotland. Margaret had been born at Tonsberg, Norway on 9th April 1283, when her mother had died in childbirth.

Margaret 'the Maid of Norway' 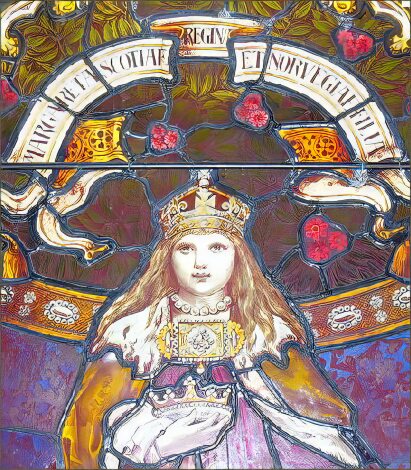 Guardians were appointed to govern the Kingdom during the young Margaret's minority. There were many among the unruly Scots nobility who considered they had plausible claims to the throne themselves, within weeks John Balliol attempted to take the crown with the aid of John Comyn, the Red Comyn. The Bruce family captured strongholds in Galloway, and fighting in the name of the Maid of Norway (Margaret), suppressed the rebellion with many important families like the Stewards supporting them.

In 1289, the Guardians maintained the peace in Scotland between the competing claims of Margaret, Robert Bruce and John Balliol. and disquieted at the thought of sending his young daughter to a land rent by dissension, King Eric of Norway solicited the protection of Scotland's neighbour and his daughter's great-uncle, the powerful and covetous Edward I of England.

The King of England proposed an advantageous marriage between Scotland's heiress and his son and heir, Edward of Caernarvon, Prince of Wales, would effectively place Scotland under English control. By the terms of the treaty of Birgham in 1290 the marriage proposal was accepted by the Scots nobles on the premise that Edward recognised the independence of the Scottish nation.

The English King sent a ship to collect his great niece and future daughter-in-law. The young Queen Margaret sailed to take up her position as Queen of Scotland in September 1290, but was fated never to arrive in her new kingdom. Tempestuous autumnal gales buffeted Margaret's ship, and she fell sick and died in the Orkney Islands. Her remains were taken to Bergen and buried beside her mother in the stone wall, on the north side of the choir, in Christ's Kirk at Bergen.

Margaret was the last of the house of Dunkeld and her death left the Scottish succession disputed by fourteen claimants, which lead directly to the first Scottish War of Independence and the accession of John Balliol as King of Scotland.

A year after the death of Margret's father, Erik II of Norway, in 1300, an imposter claiming to be Margaret appeared in Bergen, Norway. Even though Erik II himself had identified his daughter's body, she acquired the support of the citizens of Bergen and some of the clergy. Both she and her husband were later convicted of fraud. The 'False Margareth' as she came to be known, was burned at the stake in 1301.