One of Scotland's grandest castles, Stirling Castle perches dramatically on the crag of Castle Hill at Stirling, an extinct volcano, towering 250 feet above the plain below, with steep cliffs on three sides.

Stirling's importance developed from the fact that it controlled the lowest crossing point of the River Forth. The earliest recorded castle at Stirling was used by King Malcolm III Canmore in the eleventh century, in 1110, his descendant King Alexander I dedicated a chapel there and his successor, King David I, used the castle as a royal administration centre and residence. The castle we see today dates mainly from the fifteenth and sixteenth centuries, while a few structures dating from the fourteenth century still survive. 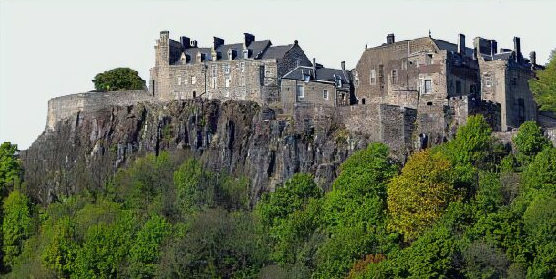 Many famous events in Scottish history took place at the castle, including the murder of the eighth Earl of Douglas by King James II in 1452, it was captured by Robert the Bruce and unsuccesfully besieged by Bonnie Prince Charlie during the '45 rebellion. In all the castle has been besieged eight times, several of which occured during the Scottish Wars of Independence. In addition, several of Scotland's Kings and Queens have been crowned at Stirling Castle. 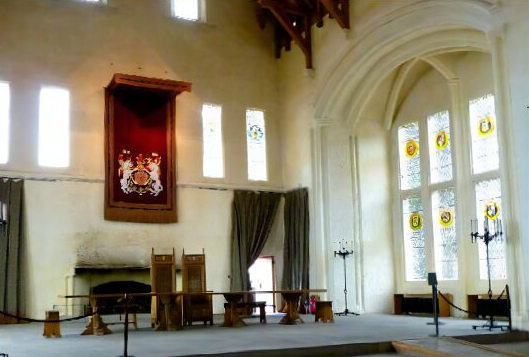 Mary Queen of Scots spent the early part of her childhood at the castle from 27 July 1543 to February 1548, when she was moved to Dumbarton Castle and eventually left for France. Mary's coronation took place in the Chapel Royal at Stirling in 1543. Following the death of her first husband, Francois II of France, Mary returned to her native Scotland in 1561, and visited Stirling Castle frequently.

The recently restored Great Hall, otherwise known as Parliament Hall, was built by King James IV and has been described as "the grandest secular building erected in Scotland in the late Middle Ages". Measuring 42 by 14.25 metres (138 by 46.8 feet), it has a superb hammerbeam roof, which is a modern reconstruction of the sixteenth-century original. The hall includes Renaissance details, such as intersecting tracery on the windows, within a conventional medieval plan. The hall boasts five fireplaces, and large side windows lighting the dais, where the king was once seated.

Stirling Castle has just completed a £12 million project to return the now magnificent royal lodgings to how they might have looked in the 1540s when the castle was the childhood home of Mary Queen of Scots. An ambitious restoration project, it has researched and hand-crafted suitable furnishings, frescoes, and replicas to furnish the rooms in the Royal Palace. 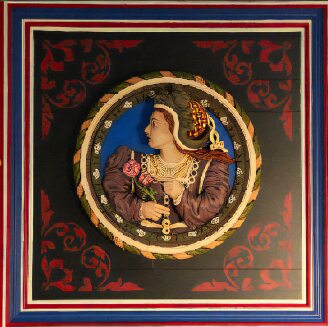 The Royal Palace is located to the left of the gatehouse, and forms the south side of the Inner Close. A three-storey building with an ornate facade of tall windows and niches which contain a selection of carved figures and Renaissance sculptures. It was built for King James V and his second wife, Mary of Guise. Begun in the 1530's in a combination of Renaissance architecture, and late-gothic detail, it was largely complete by the time of James' death in December 1542.

The Palace comprises the Royal Lodgings of the king and queen. Both the king's and queen's suites are situated on the same floor and arranged around a courtyard. Each apartment has three spacious rooms, an Outer Hall, an Inner Hall and a Bedchamber.

The ceiling of the King's Presence Chamber was originally decorated with a series of carved oak portrait roundels of kings, queens, and courtiers known as the Stirling Heads, described as "among the finest examples of Scottish Renaissance wood-carving now extant." The carvings were taken down following a ceiling collapse in 1777, and of an estimated 56 original heads, 38 survive.

Four recreations of The Hunt of the Unicorn tapestries, created by the Tapestry Studio at West Dean College, now hang in the restored Queen's Presence Chamber in the Royal Palace. It is believed that a similar series of Unicorn tapestries were part of the royal collection of King James IV. The tapestries took more than three years to weave.

The Chapel Royal was first constructed by King James IV in 1501. His great-grandson James VI rebuilt the Chapel Royal especially for the baptism of his heir Prince Henry, who was born in Stirling Castle. The old Chapel Royal, where Mary Queen of Scots was crowned in 1543, was demolished when the present one was constructed. It was elaborately redecorated for Charles I's coronation visit to Scotland in 1633 when a frieze was painted by the artist Valentine Jenkin which still survives to the present day.

The throne room and the Unicorn Tapestry 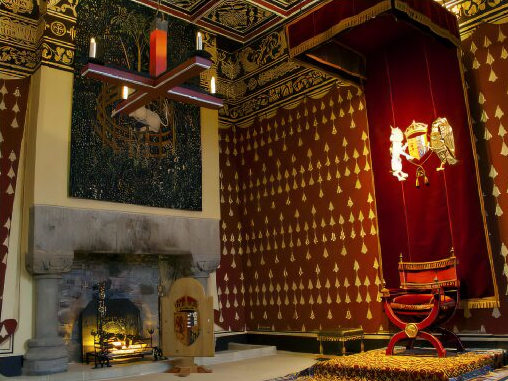 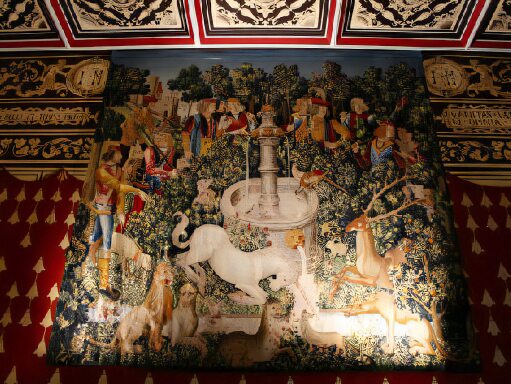 The Great Kitchens at Stirling dramatically bring to life how lavish banquets were created in the time of James IV with sensory and interactive exhibits. The vaults beneath the palace contain an interesting, child friendly exhibition covering various aspects of castle life.

The stunning views from the castle's battlements overlook two historic battlefields, that of the Battle of Stirling Bridge, fought on 11 September 1297, when the forces of William Wallace and Andrew Moray defeated the combined English forces of John de Warenne, 6th Earl of Surrey, and Hugh de Cressingham and the Battlefield of Bannockburn, where on 24 June 1314, Robert the Bruce led the Scottish forces to victory over the armies of King Edward II. The Victorian Gothic Wallace Monument, which stands on the summit of nearby Abbey Craig and was erected in the nineteenth century, is also visible. 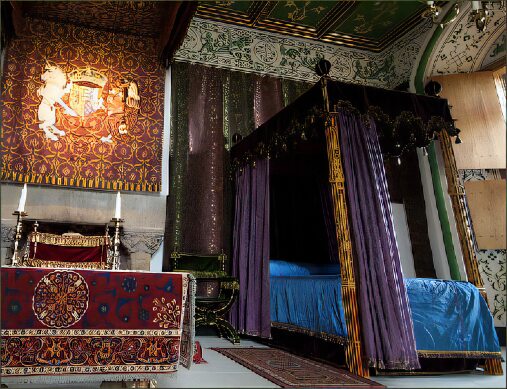 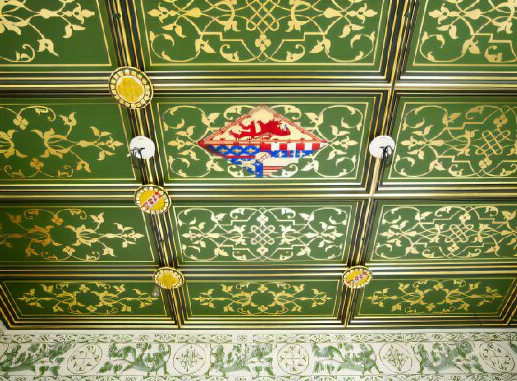 The castle has two gardens, the southern one includes a bowling green. The King's Knot, a sixteenth-century formal garden, lies below the castle's west wall now only visible as earthworks, but once including hedges and knot-patterned parterres. The gardens were built on the site of a medieval jousting arena. Beyond the King's Knot, stretching far into the distance, lay the King's Park, once the royal hunting forest.

The King's Outer Hall and Bedchamber 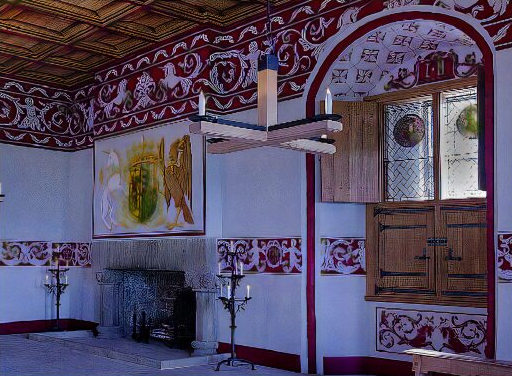 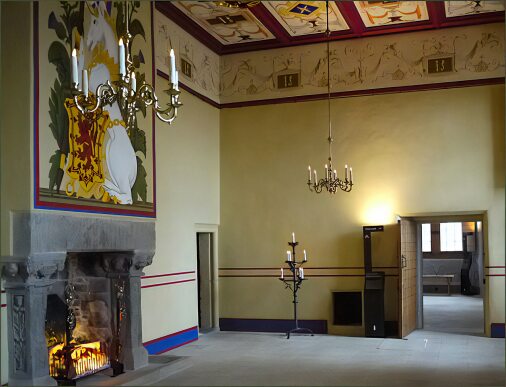 Stirling Castle is now in the care of Historic Scotland.