Henry of Scotland, Earl of Huntingdon

Henry of Scotland, Earl of Huntingdon was the son of King David I of Scotland. Through his mother Maud, 2nd Countess of Huntingdon, he was the grandson of the Saxon Waltheof, Earl of Northumbria and Huntingdon, who was beheaded by William the Conqueror in 1075 and his wife Judith of Lens, the daughter of Lambert II, Count of Lens and Adelaide of Normandy, Countess of Aumale.

Coin of Henry of Scotland 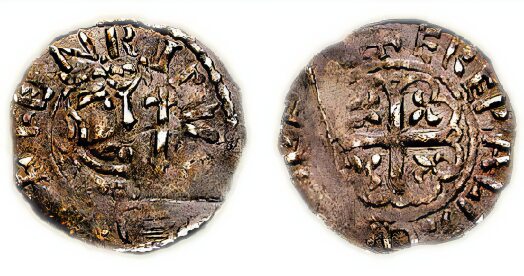 Henry was named after his uncle, King Henry I of England, who had married his paternal aunt Edith of Scotland. He was described as handsome in body and virtuous of life, beloved by all, devout towards God and most compassionate to the poor. He was granted Doncaster and the lordship of Carlisle, the honour and earldom of Huntingdon in around 1136. Henry accompanied his father King David I on his invasion of England in summer of 1138, where he led a valiant but unsuccessful charge of cavalry at the the Battle of the Standard. In April 1139, King Stephen also confirmed him in the earldom of Northumberland.

Henry married Ada de Warenne, the daughter of William de Warenne, 2nd Earl of Surrey (died 1138), and Elizabeth of Vermandois, daughter of Hugh of Vermandois. The couple produced had three sons, two of whom, Malcolm IV 'the Maiden' and William the Lion, succeeded their grandfather, David I, as Kings of Scotland, the descendants of his third son, David, Earl of Huntingdon, later inherited Scotland's throne after the Dunkeld dynasty became extinct in the male line.

Henry also had four daughters, the eldest of these Ada of Huntingdon (1139-1206), was married in 1161 to Floris III, Count of Holland. The second daughter Margaret of Huntingdon (1145-1201) Married firstly in 1160 to Conan IV, Duke of Brittany, when he died in 1171 she was married for a second time to Humphrey III de Bohun, Lord of Trowbridge and thirdly to Sir William fitz Patrick de Hertburn. The third daughter Matilda of Huntingdon was born and died in 1152. Henry's youngest daughter, Marjorie of Huntingdon, married Gille Críst, Earl of Angus.

Henry of Scotland died on 12 June 1152 at Jedburgh at the age of around thirty-seven and was buried at Kelso Abbey.

The Ancestry of Henry of Scotland

Father: King David I of Scotland