The casket and lid are carved from a solid piece of wood, which was then covered in thin bronze and silver plates. It is characterised by a mixture of Pictish artistic designs and Irish artistic traditions fused with Anglo-Saxon metalworking techniques. 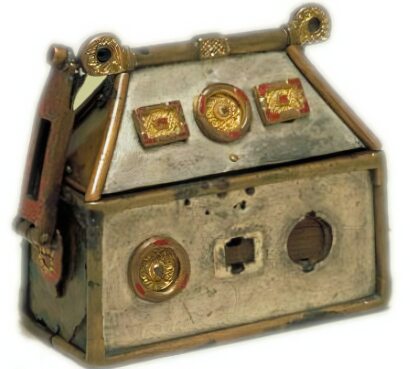 The house-shaped design of the reliquary is similar to an illumination of the Temple of Jerusalem in the Book of the Kells. Only one of two enamelled hinge plates survive, it would have been attached a strap so that the Reliquary could be carried, possibly around the neck.

From its ornamentation, possibly the work of Ionian monks, the Reliquary is thought to have been made towards the beginning of the eighth century. The silver plates on the front and lid of the casket are decorated with beasts leaping and twisting and biting at their tails on a spotted field, characteristic of Celtic art style. It has been said to be the Brecbennoch of St. Columba, a sacred battle ensign of the Scottish army, used for saintly assistance.

The founder of Arbroath Abbey, King William the Lion, entrusted the reliquary into the care of the Abbey's monks in 1211 under the condition it was paraded before the Scots army before battle. It was carried by the victorious Scottish army of Robert the Bruce against the forces of King Edward II of England at the Battle of Bannockburn in 1314. It was later preserved at Monymusk House.

Columba was the most popular saint in mediaeval Scotland but is now thought not to be the object mentioned in historical records. In addition to the Monymusk Reliquary, Columba's hand was kept in a silver and gold reliquary which is now lost.