The Anglo-Saxon tribes began their invasions of England following the departure of the Roman legions from the country. The Anglo-Saxon Chronicle places the arrival of the Anglo-Saxons in Britain as the year 449, when Saxon mercenaries, lead by their chieftains, Hengist and Horsa, the sons of a Jutish chief named Wihtgils, were invited by the Celtic King Vortigern to aid him against the Picts of Scotland and landed in Kent. 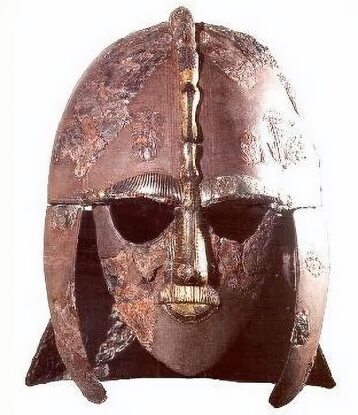 Hengest and Horsa conducted a successful campaign against the Picts on Vortigern's behalf before abandoning their erstwhile employer. They then began to take land from the Celts in south eastern England. Horsa was later killed but Hengest suceeded in establishing himself in Kent.

The Saxon tribes originated from Lower Saxony or Niedersachsen in northern Germany, the Angles probably came from Angelm in Schleswig-Holstein. At the same time, the Jutes and the Frisians from the forests and moors of Jutland, (Southern Schleswig) Denmark was also settling in the British Isles, some sources state that the Jutes were the Geats, of southern Sweden, mentioned in the epic poem Beowulf. All three groups of invaders spoke closely related German dialects.

Tradition states that the British found a strong leader in their struggle in the person of the legendary King Arthur, who commanded a body of well-armed cavalry and achieved a great victory over the Saxons at Mount Badon, which was probably fought between 490 and 518. Attempts have been made to identify the site of the battle as south-west of the Upper Thames or Badbury in Dorset, but its true location remains a subject of debate.

After the death of Arthur, Celtic resistance to the invaders had collapsed by 580, the Welsh monk Gildas relates "the groans of the Britons", "The barbarians" he states, "drove them to the sea and the sea drove them back to the barbarians."

The Celts were finally either assimilated into Anglo-Saxon society or driven into the fringes of Britain, Wales, the Cornish peninsula and the northwestern area of Cumbria. Wales derives its name from the Anglo-Saxon word Wealas, meaning foreigner, Cornwall derives from the words Kernow and Waelas, Cumbria from the Celtic word Cymru, meaning comrades, while the conquered territory came to be referred to as Angleland.

A study at University College in London compared a sample of men from the United Kingdom with samples from those areas where the Anglo-Saxons are believed to have originated and found almost identical genes. But clear differences were exhibited between the genetic make-up of the people of Welsh origins that were studied. There are clear signs of the Germanic influx of the Anglo-Saxons in parts of Britain but there was a continuing indigenous element to English paternal genetic makeup, a substantial amount of an 'ancient British' DNA which most closely matches the DNA of modern inhabitants of France and Ireland. Bryan Sykes, Professor of Human Genetics at the University of Oxford has stated that only 10 per cent of men "now living in the south of England are the patrilineal descendants of Saxons or Danes, that figure rising to 15 per cent north of the Danelaw and 20 per cent in East Anglia".

The Anglo-Saxon language, also referred to as Old English, or Englisc as it was known to its speakers, was to become the common language of England until the time of the Norman Conquest of 1066 when under the influence of the Norman-French spoken by the Norman conquerors, it evolved into Middle English roughly between 1150-1500.

The Anglo-Saxons worshipped many gods, their religion was closely related to the Old Norse beliefs of the Vikings, the 4 principal gods being Woden, God of Wisdom, Thor, the thunder god, Tiw, god of war and Frig, goddess of fertility, from whom the names of the days Wednesday, Thursday, Tuesday and Friday are derived. 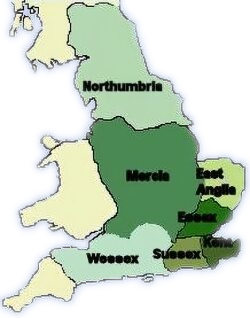 By the beginning of the seventh century the boundaries of the Anglo-Saxon Tribal kingdoms, known as the Heptarchy, had formed. The Angles inhabited the kingdoms of Northumbria (Nord Angelnen), which once stretched as far as south-east Scotland, Mercia (Mittlere Angelnen) and East Anglia (Ost Angelnen). While the Saxons held Sussex, Essex, and Wessex. Wessex was occupied by the Gewissae, who landed on the south coast in 495, under the leadership of Cerdic, whose mother is thought to have been of Celtic extraction, and his son or grandson, Cynric, ancestor of Egbert and of the royal Wessex dynasty which followed him.

Cerdic appears to have reigned over the kingdom of Wessex for about sixteen years, after which the throne passed to Cynric in about 554. The Jutes held Kent, parts of Hampshire and the Isle of Wight. The county name of Kent is a Jutish version of the original Romano-British Cantii.

The Anglo-Saxon tribal kingdoms existed in a state of internecine warfare. Occasionally a king of one of the larger three kingdoms, Wessex, Mercia and Northumbria, would emerge from the dynastic turmoil to be accepted as Bretwalda (Bretanwealda in Old English) or overlord by the others.

The Anglo-Saxons were converted to Christianity from two sources. The Celtic Church, which survived in Wales, Cornwall, and Ireland, influenced the north of England from an early base on Lindisfarne Island. In addition, the Roman Catholic Church gained a foothold in the south, when St.Augustine (died circa 604), a Benedictine monk, was sent by Pope Gregory the Great to conduct a mission to Aethelbert, King of Kent, the great grandson of Hengest. Augustine landed at Thanet in 597. Aethelbert had already married a Christian princess, Bertha, the daughter of the Frankish king, Charibert, who encouraged his conversion. On June 2, 597, Ethelbert was baptized, and thereafter the new faith spread rapidly among the Anglo-Saxons. Augustine was later to become the first Archbishop of Canterbury.

In the 630s, Birinus (600-649) converted the kingdom of Wessex under Cynegils (d.642), who was baptised with King Oswald of Bernicia as his godfather, leading Birinus to be known as the "apostle to the West Saxons", later become the first Bishop of Dorchester.