Competitors for the Crown of Scotland

King Alexander III produced three children who all predeceased their father. He, therefore, obtained a promise from the nobles in 1284 to recognise his granddaughter Margaret, "Maid of Norway", the daughter of Erik II of Norway and Alexander's daughter, Margaret of Scotland was the heir to Scotland, who after his death succeeded to the Scottish throne. However, the seven-year-old Margaret died on the Orkney Islands on around 26 September 1290. With her death, the mainline of the House of Dunkeld became extinct and plunging Scotland into crisis as fourteen claimants asserted their rights to the throne.

William Fraser, Bishop of St. Andrews, concerned that civil war would be the result, wrote to King Edward I of England, asking for his assistance in choosing a new king of Scotland. Edward siezed the chance to demand sasine of the Scottish royal estate, but agreed to pass judgment in return for recognition of his suzerainty. The guardians of Scotland would not grant this, but de Brus paid homage to the English king. All the claimants eventually swore oaths of homage, John Balliol being the last to do so. The guardians were forced to concede on the issue. 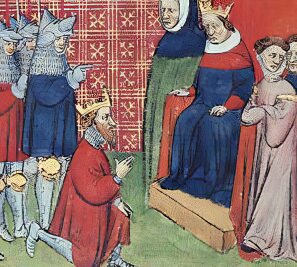 Robert de Brus was the Regent of Scotland during the minority of King Alexander III and was the king's closest surviving male relative. He was occasionally recognized as a Tanist of the Scottish Throne. In the succession dispute, he pleaded tanistry and proximity in a degree of kinship to the deceased King. Robert de Brus later resigned from the lordship of Annandale and his claim to the Scottish throne to his eldest son Robert de Brus.

King Edward I of England.

Edward I based claim to the Scottish throne on his descent from Malcolm III's daughter Edith of Scotland , the wife of Henry I of England, whose daughter Matilda had been the mother of Edward's great-grandfather, Henry II of England. Edward was also the brother-in-law of Alexander III, who had married Edward's sister Margaret of England. Edward was aware that his claim was not strong, and entered it only as a formality and to affirm his position as president of the court.

John's mother was Eleanor Balliol, the eldest daughter of John I de Balliol and Margaret the parents of King John Balliol. Margaret was the daughter of David, Earl of Huntingdon, the grandson of King David I. The Red Comyn thereby combined two lines of royal descent, Gaelic and Norman. At the outset of the Scottish Wars of Independence, the Comyns were one of Scotland's most dominant families

The emnity between the Coomyns and the Bruces culminated in the murder of the Red Comyn by Robert the Bruce, grandson of the Competitor,on 10 February 1306 at the Church of the Grey Friars in Dumfries. 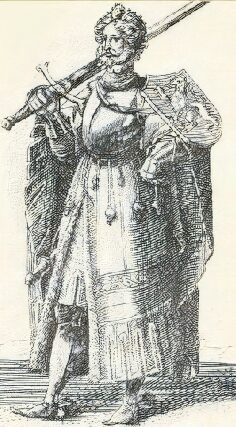 Floris claimed that Earl David had given up his right to the throne to his brother William in exchange for a grant of land in Aberdeenshire. If true, this would make Floris the rightful King of Scotland. Floris claimed that although he did not possess copies of the documents detailing the handover of power one must exist somewhere in Scotland and Edward postponed the court for a full ten months while a search was made through various castle treasuries. No copy was found at the time, but copies later surfaced at Pluscarden. One of the early "certified copies", dating the certification seals of the bishop of Moray and the prior of Pluscarden to 1291, is currently located in the Hague. This document is thought to be a forgery.

Floris's case was rejected for lack of evidence. However, there is evidence that he entered into an agreement with Bruce in which if one of them was to successfully claim the throne, he would grant the other one-third of the kingdom as a feudal fief. Other clauses in the agreement strongly suggest that of the two, only Bruce could expect to be a successful claimant. This has been interpreted to mean that Floris and Bruce were in collusion, with Bruce hoping that taken together their arguments could defeat Balliol, with Bruces' claim then being upheld in favour of Floris'. It is striking that there is no record of Bruce and Floris being at loggerheads during the proceedings.

Hastings was an Englishman with extensive estates in Scotland, Hastings and had fought from the 1290s in the Scottish, Irish and French wars of King Edward I and was later Seneschal of Aquitaine. He had his lawyers argued that Scotland was not a true kingdom at all, based, amongst other things, on the fact that Scots kings were traditionally neither crowned nor anointed. As such, by the normal rules of feudal law the kingdom should be split amongst the direct descendants of the co-heiresses of David I. Unsurprisingly, a court made up of Scots nobles rejected these arguments.

He descended, in an allegedly legitimate unbroken male line, from a younger brother of King Duncan I of Scotland (who allegedly also was a younger son of Bethóc, the male line being that of Lords of Dunbar, originally Earls of Northumbria, later Earls of Dunbar. His son became recognized as the Earl of the Scottish Marches. Also, an additional claim in his favour was that made by his wife, Marjory, daughter of Alexander Comyn, Earl of Buchan, allegedly descended from King Donald III.

Along with the Earl of Angus, Robert Bruce the elder, and his son the Earl of Carrick, he swore fealty to Edward I at Wark on 25 March 1296. In the same year, he was betrayed by his wife, Marjorie, daughter of Alexander Comyn, Earl of Buchan, who took the Scottish side and retained the castle of Dunbar for Balliol, but was obliged to surrender it to King Edward I of England in April 1296. In 1297 it appears that the Earl ceased his allegiance to Edward I, held his lands of the Scottish Crown, and was favourably received by Sir William Wallace. In 1298 he was King's Lieutenant for Scotland, and in 1300 was present at the siege of Caerlaverock Castle, with his eldest son and heir, Patrick. 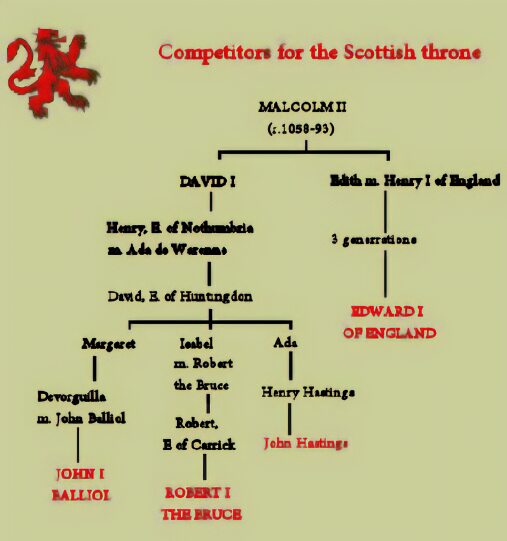 He was later appointed Lord High Admiral and was one of the commissioners with the Archbishop of York, and others, to negotiate peace between King Edward II of England and Robert de Bruce, who had assumed the title of king of Scotland.

Nicholas de Soules, a member of the family of the lords of Liddesdale, was the son of William II de Soules by his wife Ermengarde, daughter of Alan Durward by his wife Marjorie, natural daughter of King Alexander II

Patrick Galithly, a burgess of Perth and the son of Henry Galithly, who Patrick claimed was the natural son of King William the Lion.

Eric II, King of Norway, the eldest surviving son of King Magnus the Lawmender of Norway, and his wife Ingeborg Eriksdatter, daughter of King Eric IV of Denmark, had married Princess Margaret of Scotland and was the father of Queen Margaret and son-in-law of King Alexander III. Eric later married Isabel Bruce, sister of King Robert I of Scotland.

King Edward I gave judgment on the Scottish case on November 17, 1292, in favour of John Balliol