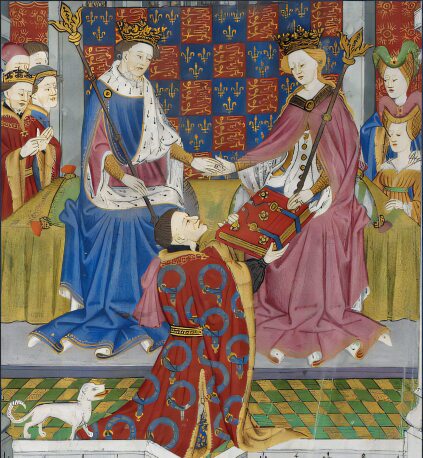 John Talbot, 1st Earl of Shrewsbury and 1st Earl of Waterford was born at Blechmore, in Shropshire. He was the second son of Sir Richard Talbot 4th Baron Talbot, of Goodrich castle, in Herefordshire and Ankaret le Strange, 7th Baroness Strange of Blackmere. He became his father's heir on the death of his elder brother, Sir Gilbert while his younger brother Richard became Archbishop of Dublin and Lord Chancellor of Ireland. The family were descended from Richard Talbot, a tenant in 1086 of Walter Giffard at Woburn and Battledsen in Bedfordshire.

His father died in 1396 when John was around nine years old and his mother Ankaret remarried to Thomas Neville, Lord Furnival. He was married before 12 March 1407 to his step-sister, Maud Neville, 6th Baroness Furnivall. The couple produced five children:-

His first wife, Maud died on 31 May 1422 and on 6 September 1425, Talbot married Lady Margaret Beauchamp, eldest daughter of Richard de Beauchamp, 13th Earl of Warwick and Elizabeth de Berkeley in the chapel at Warwick Castle. They had five children:-

Talbot had at least one illegitimate child, Henry. He may have served in France with his father as it is recorded that a bastard son of the Earl of Shrewsbury was captured by the Dauphin on 14 August 1443

From 1404 to 1413 he served with his elder brother Gilbert in the rebellion of Owain Glyndwr against Henry IV. For a five year period from February 1414 he was Lord Lieutenant of Ireland, during which time he captured the rebel Donald Mac Murrough. He became involved in a dispute with the Earl of Ormond and Reginald Grey, 3rd Baron Grey de Ruthyn about the inheritance of Wexford. Complaints were registeed against him both for harsh government in Ireland and for violence in Herefordshire, where he was a friend of the Lollard Sir John Oldcastle, and for land disputes with retainers of the Earl of Arundel. The dispute with the Earl of Ormond escalated into a long-running feud between Talbot supported by his brother, Richard Archbishop of Dublin, and the Butler family and their allies the Berkeleys. . Friendly relations were finally restored by the marriage of Shrewsbury's son and heir to Ormond's daughter, Lady Elizabeth Butler.

From 1420 to 1424 Talbot served in the Hundred Years War in France with Henry V, he was present with the king at his triumphant entry into Paris, he also fought at the Battle of Verneuil on 17 August 1424. In 1427 he returned to France, where he fought alongside Henry V's brother John, Duke of Bedford and Richard Beauchamp, Earl of Warwick with distinction in Maine and at the Siege of Orléans, which failed through the intervention of Joan of Arc, Maid of Orleans. Orleans had been under siege since 12 October 1428 and was almost totally surrounded by a ring of English strongholds. When Joan and one of her French commanders, La Hire, arrived with supplies on April 29, she was informed that any action must be deferred until further reinforcements could be brought in. On the evening of May 4, whilst resting, Joan sudenly rose, apparently inspired, and announced that she must go and attack the English. Having herself armed, she proceeded to the east of Orleans toward the fort of Saint Loup where skirmishing with the English was taking place. Her arrival inspired the French,who succeeded in capturing the fort.

At the French victory of the Battle of Patay on 18 June 1429 Talbot was captured and held prisoner by the French for four years. He was released in exchange for the French leader Jean Poton de Xaintrailles and returned to England in May 1433. He remained in England until July when he returned to France under John Beaufort, 1st Duke of Somerset. Talbot was a valiant, daring and aggressive soldier, probably the most audacious captain of the age. His trademark was rapid aggressive attacks. He was rewarded by being appointed governor and lieutenant general in France and Normandy and, in 1434, John, Duke of Bedford appointed him Count of Clermont. 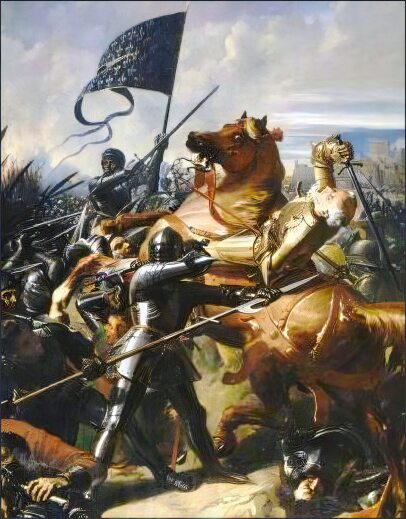 On the death of the Duke of Bedford during the Congress of Arras in 1435, the Burgundian government in Paris deserted their English allies for the French, leaving Talbot as the main English general in the field. In January 1436, he led a small force including Thomas Kyriell and routed La Hire and Xaintrailles at Ry near Rouen. The following year at Crotoy, after a daring passage of the Somme, he put a large Burgundian force to flight. In December 1439, following a surprise flank attack on their camp, he dispersed the army of the Constable Richemont, and the following year he retook Harfleur. In 1441, Talbot pursued the French army four times over the Seine and Oise rivers in an attempt to bring it to battle. Around February 1442, he returned to England to request urgent reinforcements for Richard, Duke of York in Normandy.

On Whit Sunday, 20 May, Henry VI created him Earl of Shrewsbury. Just five days later, with the requested reinforcements, Talbot returned to France where in June they mustered at Harfleur. During that time, he met his six-old year daughter Eleanor for the first time. In June 1443, Talbot again returned to England on behalf of the Duke of York to plead for reinforcements, but this time the English Council refused, instead sending a separate force under Talbot's brother-in-law, Edmund Beaufort.

In 1445, King Henry VI appointed him Constable of France. Taken hostage at Rouen in 1449 he promised never to wear armour against the French King again, and he was true to his word. However, though he did not personally fight, he continued to command English forces against the French. In 1452 Talbot was ordered to Bordeaux to save the duchy of Aquitaine against French attacks. He repaired castle garrisons facing mounting pressure from France, when some reinforcements arrived with his son John, Viscount Lisle in spring 1453.

He was defeated and killed at the Battle of Castillon, fought near Bordeaux on 17 July 1453. Badly outnumbered he attacked the enemy without waiting for artillery cover, he was not wearing armour due to previous agreements with the French when he was released from captivity in Normandy. There is some dispute over the exactly how Talbot died, with one account stating his horse was killed beneath him, and he was pinned to the ground by it and was killed by a French archer with an axe, while the second states he was hit in the thigh with a cannonball, which broke his leg and was then dispatched by the French. His son John Talbot, 1st Viscount Lisle was also slain in the battle, it is reported, attempting to defend his father, their bodies were found side by side. The Battle of Castillon effectively ended English rule in the duchy of Aquitaine, a principal cause of the Hundred Years' War. Talbot was buried in France while his heart was buried in the doorway of St Alkmund's Church, Whitchurch, Shropshire.

The victorious French generals raised a monument to Talbot on the field called Notre Dame de Talbot and a French Chronicler paid him tribute: "Such was the end of this famous and renowned English leader who for so long had been one of the most formidable thorns in the side of the French, who regarded him with terror and dismay".