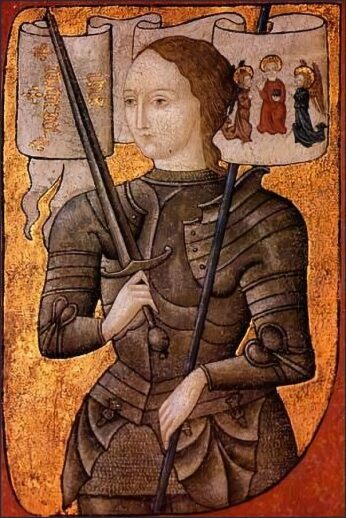 Joan of Arc, also known as the 'Maid of Orleans' was born to a peasant family in in the village of Domrémy on the borders of the duchies of Bar and Lorraine, in north-east France, during the Hundred years War between England and France. Joan's father Jacques d'Arc was a poor tennant farmer, her mother was Isabelle Romee.

At the time of Joan's birth France was largely in the possession of the English. The crown of France was in dispute between the dauphin Charles, son of the Valois king Charles VI, and King Henry VI of England. Henry was in alliance with Philip the Good, duke of Burgundy and occupied much of northern France. The apparent hopelessness of the Dauphin's cause at the end of 1427 was underlined by the fact that, five years after his father's death, he still had not been crowned.

At the age of thirteen, in the summer of 1425, Joan began to have visions of angels and heard strange voices, which instructed her to go to the relief of the Dauphin Charles and drive the English from France. Joan became convinced she had been given a mission from God to save France. Modern speculation claims that she may have suffered from schizophrenia. Despite the discouragement of her parents and the village priest, Joan was determined to carry out her mission.

She demanded that the Duke of Lorraine collect the soldiers and resources necessary to bring her to Chinon, where the Dauphin was staying. Joan was finally granted an escort of five veteran soldiers and a letter of referral to Charles by Robert de Baudricourt, governor of Vaucouleurs. Dressed in men's clothes, she travelled to Chinon to see the Dauphin, although initially uncertain whether to recieve her, to test her, the Dauphin disguised himself, but was at once recognised by Joan amidst a group of attendants. After she was interrogated by ecclesiastical authorities at Poiters, Charles decided to allow the eighteen year old peasant girl to lead an army of about five thousand men against the English at Orleans. Before beginning her campaign, Joan summoned the King of England to withdraw his troops from French soil.

Orleans had been under siege since 12 October 1428 and was almost totally surrounded by a ring of English strongholds. When Joan and one of her French commanders, La Hire, arrived with supplies on April 29, she was informed that any action must be deferred until further reinforcements could be brought in. On the evening of May 4, whilst resting, Joan sudenly rose, apparently inspired, and announced that she must go and attack the English. Having herself armed, she proceeded to the east of Orleans toward the fort of Saint Loup where skirmishing with the English was taking place. Her arrival inspired the French,who succeeded in capturing the fort.

On the morning of May 6 Joan marched on the fort of Saint Augustins, which the English evacuated to defend a stronger position nearby, but Joan and La Hire advanced on them there and took the fort by storm. Very early on May 7 the French advanced against the fort of Les Tourelles. Although Joan was wounded in the neck by an arrow, she quickly returned to the fight, and due to her example that the French commanders maintained the attack until the English capitulated. Next day the English were seen to be in retreat. 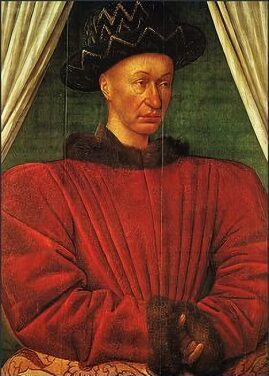 Joan persuaded Charles to give her co-command of the army with Duke John II of Alençon, her plan was to recapture nearby bridges along the Loire prior to an advance on Reims and the coronation of Charles VII as King of France. Reims was around twice as far as Paris and deep within English occupied territory. The French army set out for Reims on 29 June and accepted the conditional surrender of the Burgundian held city of Auxerre on 3 July. Other towns in their path of their march returned to French allegiance without resistance. Troyes capitulated after a bloodless four-day siege.

Reims opened its gates to the French army on 16 July and the coronation of Charles II took place the next morning. Joan and the duke of Alençon favoured an immediate march on Paris, but Charles VII instead negotiated truce with Phillip, duke of Burgundy. Duke Philip used the truce as a stalling tactic to enable him to reinforce the defences of Paris, after which he broke the agreement. During the interim, Joan marched at the head of the French army to towns near Paris and accepted more peaceful surrenders.

John Duke of Bedford, the uncle of King Henry VI led an English army to confront the French on 15 August. Joan attacked Paris on 8 September. Despite being wounded in the leg by a crossbow bolt, she continued directing the French troops in the fighting. The following morning she received an order from Charles VII to withdraw. Charles then negotiated a short lived truce with the English. Joan's reputation was such that the English blamed their defeats on her alleged supernatural powers. John Duke of Bedford described her as "A disciple and limb of the Fiend, called the Pucelle, that used false enchantment and sorcery."

The following May, Joan proceeded to Compiègne to defend the city against an English and Burgundian siege. She was taken captive during a skirmish on 23 May 1430, Joan had ordered a retreat into the nearby fortifications of Compiègne after the advance of an additional force of Burgundians, she was the last to leave the field, the Burgundians surrounded the rear guard, and Joan was unhorsed by an archer. King Charles VII failed to intervene on her behalf. Joan attempted to escape on several occasions, during one attempt she jumped from a 70 foot high tower in Vermandois into a dry moat, after which she was moved to the Burgundian town of Arras. The English eventually purchased her from Duke Philip of Burgundy. 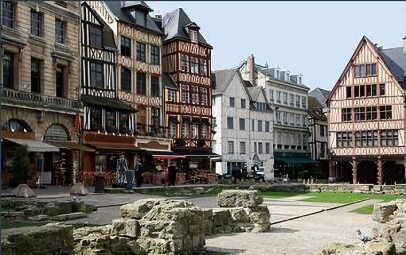 The Duke of Bedford put the then nineteen year old Joan on trial, the verdict was a foregone conclusion. She was interrogated thoroughly, the Anglo-Burgundians tried to discredit her by questioning her virginity and linking her to magic. Her wearing of men's clothes was used against her, her prosecutors claiming that it was against the natural order of things. Her trial and interrogations continued through the first four months of 1431. During that time Charles VII, for whom she had risked so much, made no attempt to save her through ransom or prisoner exchange. Joan she was sentenced to be burned for heresy, throughout her trial Joan declared that her voices came from God and had not deceived her.

Eyewitnesses described the scene of her execution at Rouen by burning at the stake on 30 May 1431. Joan was tied to a tall pillar at the Vieux-Marché, she asked two of the clergy, Fr Martin Ladvenu and Fr Isambart de la Pierre, to hold a crucifix before her. As the fire was lit, and began to spread, she uttered her last words, "Jesus! Jesus! Jesus," an English soldier also constructed a small cross which she put in the front of her dress. After Joan was dead, the English raked back the coals to expose her charred body so that no one could claim she had escaped alive, then burned the body twice more to reduce it to ashes and prevent any collection of relics. Her remains were thrown into the River Seine.


Joan of Arc was beatified in 1909. Pope Benedict XV canonized Joan on 16 May 1920. As Saint Joan of Arc, she has become one of the most popular saints of the Roman Catholic Church.