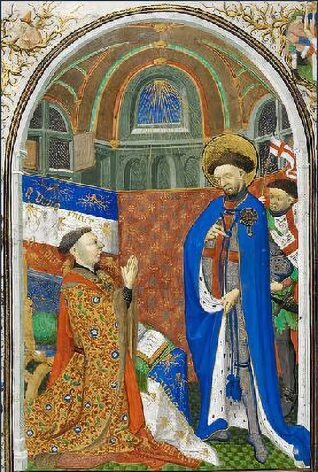 John of Lancaster, Duke of Bedford was born on 20 June, 1389 and was the third surviving son of King Henry IV and his first wife Mary de Bohun.


John's mother died in 1394, when he was but five years old, in 1399 his father Henry of Bolingbroke, a grandson of Edward III, usurped the throne of his cousin Richard II and was crowned Henry IV. The young John was knighted at his father's coronation and in 1405 he was granted lands forfeited from the powerful Percy family. His father was succeeded by his eldest son Henry V who created his brother John Earl of Kendal, Earl of Richmond and Duke of Bedford in 1414. Between 1415 and 1422 he served as lieutenant of the kingdom on three occasions while Henry was campaigning in France.

He was present at the death of Henry V, who died of dysentry at the early age of 35, at Vincennes in France in 1422. John vied with his younger brother, Humphrey, Duke of Gloucester, for control of the Kingdom during the minority of his nephew King Henry VI, who became King of England and France in his infancy. By the terms of Henry V's will, Bedford was declared Regent but was heavily engaged in conducting the ongoing war with France, during his absence, Humphrey acted as Lord Protector. 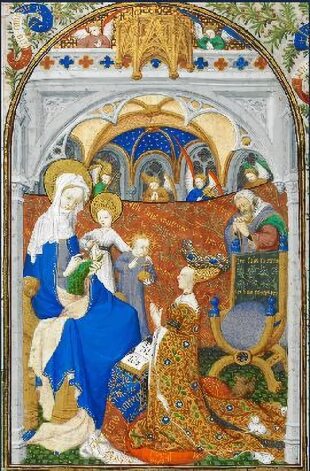 A skilfull general and an able administrator, Bedford maintained Henry V's conquests in France and defeated the French a number of times, including at the Battle of Verneuil, fought on 17 August 1424. Although a skilled diplomat, throughout this period he struggled to maintain the crucial Anglo-Burgundian alliance, which at the time was threatened by hostility between his brother Humphrey and Philip, Duke of Burgundy. He was recalled to England in 1426 to arrange a reconciliation between the Humphrey of Gloucester and the chancellor, his half-uncle Henry Beaufort.

John returned to France in 1427. The arrival on the scene of Joan of Arc breathed new life into the French, Joan forced him to raise his siege of Orléans in April 1429, which marked the turning point of the war. She then marched through the Loire Valley liberating towns held by the English. Bedford sent reinforcements which were annihilated at Patay. Joan accompanied Charles VII to Rheims for his coronation and Bedford consequently strengthened his forces in Paris. He led an army out of Paris in early August of 1429 and sent an angry and insulting letter to Charles:-

"Charles of Valois, who styled yourself Dauphin, and now without cause call yourself King .You seduce and abuse the ignorant and rely upon the assistance of the superstitious and reprobate, and even of that deranged and infamous woman who goes about in men's clothes and is of dissolute conduct.'

Joan of Arc was eventually captured by the English and in 1431, Bedford had her tried and executed, Joan was burned at the stake as a witch at Rouen, he then went on to arrange the coronation of his young nephew Henry VI as King of France which took place in Paris.

Bedford married Anne, the daughter of Duke John the Fearless on 14 June 1423, at Troyes to cement England's alliance with Burgundy. Although the marriage produced no children it seems to have been a happy one. After Anne's death in Paris, of the plague in 1432, John was remarried to the seventeen year old Jacquetta of Luxembourg, daughter of Peter I, Count of Saint-Pol, (who through her second marriage was to become the mother of Elizabeth Woodville consort of the Yorkist King Edward IV). He had an illegitimate daughter Mary, who married Pierre de Montferrand, lord of Lesparre in Aquitaine (d. 1454) and an illegitimate son Richard, to who he bequeathed the castle and lordship of Haye-du-Puits in France. Richard was later legitimated by his cousin Henry VI.

John had been Governor in Normandy between 1422-1432 where the University of Caen was founded under his auspices. He was an extremely important commissioner of illuminated manuscripts, both from France and England. The three most important surviving manuscripts of his are the Bedford Hours and the Salisbury Breviary, which were both made in Paris, and the Bedford Psalter and Hours of about 1420-23, which is English. All are lavishly decorated and famous examples of the style of the period. John gave the Bedford Book of Hours, an outstanding example of late medieval illumination, to his nephew Henry VI in 1430. It is now kept in the British Library.

John died during the Congress of Arras at his Castle of Joyeux Repos in Rouen, his death came as Burgundy was in the process of abandoning their English allies and making a separate peace with France. He was buried at Rouen Cathedral in Normandy.