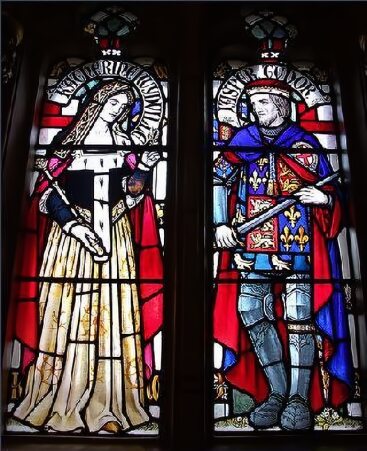 Jasper Tudor, son of Catherine of Valois, (the French widow) of Henry V and Owen Tudor, her Welsh clerk of the Wardrobe was born circa 1431 at the Bishop of Ely's manor at Hatfield in Hertfordshire. It is not known with certainty whether he was born legitimately after his parents were secretly married.

By all accounts Owen, a descendant of Anglesey landowners, was a handsome young man, the chroniclers dwell upon his beauty, at some point he became the Dowager Queen's lover. Legend relates that Owen caught the Queen's eye when she saw him swimming, or that he tripped and fell into her lap when dancing. The affair is thought to have started at Leeds Castle in Kent.


No documentation has survived of Catherine's marriage to Owen Tudor in 1429. The discovery of at least three of the queen's illegitimate children had caused scandal at the time, and was seen as an insult to the memory of the great Henry V. Owen and Catherine produced at least five children in all. Edmund Tudor, Jasper and Owen were all born away from court. They also had two daughters, Tacinda, who married Reginald Grey, 7th Baron Grey de Wilton and Margaret who later became a nun.

In 1436, when Catherine was pregnant with her fifth child by Tudor, rumours of the Queen's secret marriage reached the ear of Humphrey, Duke of Gloucester. Owen Tudor was imprisoned and Catherine retired to Bermondsey Abbey, shortly after giving birth to their daughter Margaret, on 3 January 1437, distressed and traumatised at the forced separation from her husband and children, Catherine fell gravely ill. Her son Henry VI sent her a 'tablet of gold, weighing thirteen ounces on which was a crucifix set with pearls and sapphires' as a token of his love. Catherine died in disgrace on 3rd January 1437 and was buried in the Lady Chapel of Westminster Abbey. Henry VI provided an altar tomb and included an inscription describing her as his father's widow, with no reference to her second marriage.

Owen Tudor lived on until 1461, on 2nd February 1461 he fought at the Battle of Mortimer's Cross for his step-son against Edward, Earl of March, the Yorkist claimant to the throne. The Lancastrian's were defeated in battle and Owen was subsequently beheaded at Hereford. He was reported not to have been convinced of his impending death until the collar was ripped off his doublet by the executioner. At this point he is alleged to have said that "the head which used to lie in Queen Catherine's lap would now lie in the executioner's basket". His head was set on the market cross, where a mad woman combed his hair and washed his face, setting lighted wax torches round about it.

Jasper and and his brother Edmund Tudor went to live with Katherine de la Pole, Abbess of Barking and sister of the Duke of Suffolk. Sometime after 1442, King Henry VI, their half-brother, took on a role in their upbringing, Edmund was knighted and both the brothers were given Earldoms by Henry VI, Edmund became Earl of Richmond, while Jasper Tudor was created Earl of Pembroke. Their younger brother, Owen became a monk at Westminster Abbey.

Jasper took Carmarthen and Aberstwyth Castles in 1456 but later lost them to William Herbert. He brought up his nephew, Henry Tudor, the future King Henry VII, who was the posthumous son of his brother Edmund and Lady Margaret Beaufort, and who was born at Jasper's castle of Pembroke. On the accession of the Yorkist King Edward IV in 1461, Jasper was attainted and his lands confiscated by the crown. William Herbert, took custody of Jasper's nephew Henry Tudor, Earl of Richmond, when he captured Pembroke Castle. 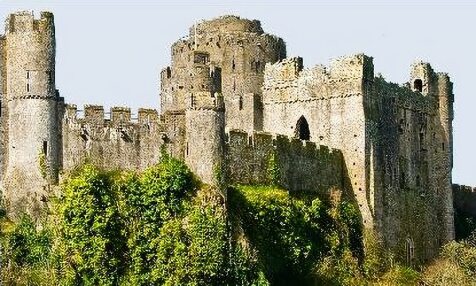 Jasper continued to try to raise support for the Lancastrians in Wales, but was eventually forced to flee to Scotland, along with the Duke of Exeter, who had survived the battle at Towton. He returned to Wales in 1468, in attempt to relieve Harlech Castle, which held out for King Henry VI, probably landing at the Dyfi estuary near Harlech, and marched toward Denbigh, by which time he his force had grown to 2,000 men. He succeeded in taking the castle then burned it, but was then defeated by William Herbert, who was rewarded with his forfeited earldom of Pembroke.

During the short lived restoration of Henry VI, he briefly regained his earldom, Henry Tudor, who had remained in the Herbert household, was taken into the protection of of Sir Richard Corbet, who was able to convey him to his uncle. On the return to England of Edward IV in 1471, Jasper was again forced into flight. Escaping from Tenby with the young Henry Tudor, fierce storms in the Channel forced them to land at Le Conquet in Brittany where they obtained refuge from Duke Francis II.

On the death of Edward IV in 1483, his thirteen year old heir, Edward V was deposed by his uncle who took the throne as Richard III. Henry Tudor landed at Milford Haven in South Wales on the 7th August, 1485, accompanied by his uncle Jasper, a few die hard Lancastrian lords and about 2,000 French mercenaries. He defeated Richard III in battle at Bosworth Field and ascended the throne as Henry VII, the first king of the new Tudor dynasty. Jasper's previous attainders were annulled and he was restored to all his former titles and additionally created Duke of Bedford.

Jasper was married on 7 November 1485 to Catherine Woodville (circa 1458-1509), widow of Henry Stafford, 2nd Duke of Buckingham. Catherine was the aunt of Henry's bride, Elizabeth of York and the daughter of Richard Woodville, 1st Earl Rivers and Jacquetta of Luxembourg. Although there were no children of the marriage, Jasper did have two illegitimate daughters:-

(i)Thomas Gardiner, Prior of Tynemouth

Jasper Tudor died on 21 or 26 December 1495, and was buried at Keynsham Abbey in Somerset, where he had founded a chantry for four priests, to sing mass for his father, Catherine his mother, and Edmund his elder brother. Two months after Jasper's death, his widow Catherine Woodville married Richard Wingfield, who was about twelve years her junior.