Katherine Swynford, ancestress of the Beaufort family, was probably born in Hainaut, which is now in Belguim, in 1349 or 1350, her birthdate may have been November 25, which is the feast day of St. Catherine of Alexandria. She was the daughter of Paon de Roet, a Flemish herald, who was later knighted. Catherine had three siblings, two sisters, Philippa and Isabel and a brother, Walter de Roet. Isabel de Roet was later to become Canoness of the convent of St. Waudru's, Mons. Philippa, a lady in waiting in Queen Philippa of Hainaut's household, married the English poet Geoffrey Chaucer. Katherine is generally believed to have been his youngest child in the family.

The de Roet family came to England in 1351, Katherine married the knight Hugh Swynford, of the manor of Kettlethorpe in Lincolnshire, in about 1366, at St Clement Danes Church, at Westminster. Hugh Swynford, a knight in the service of John of Gaunt, was the son of Thomas Swynford and his wife Nicole Druel.

The couple had either two or three children, Blanche who was born on 1 May 1367 and who John of Gaunt, Duke of Lancaster, (the third surviving son of King Edward III) stood as godfather to, a son Thomas was born on 21 September 1368 and possibly Margaret Swynford (born circa 1369), who was later recorded as a nun of the Barking Abbey nominated by command of King Richard II. 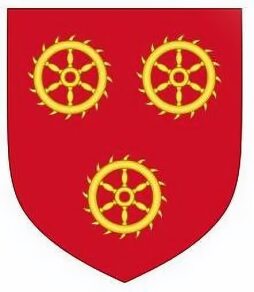 Katherine was employed the household of John of Gaunt, Duke of Lancaster where she acted as governess to the Duke's daughters Philippa and Elizabeth of Lancaster. Their mother, the Duke's first wife, the Duchess Blanche, had Katherine's daughter Blanche (who had been named after her) lodged within her own daughters' chambers and afforded the same luxuries as them. Blanche herself taught her daughters to read and write.

Blanche of Lancaster died at Tutbury Castle in Staffordshire, on 12 September 1368 while her husband was on the continent, Katherine sent a priest to absolve the Duchess before she died. She was but twenty three years old at the time of her death. It is thought that Blanche may have died after contracting the Black Death which was rife in Europe at the time. John of Gaunt honored Katherine "for the care shown to the late Duchess and for the Lancastrian children after their mother's death". awarding her her own blazon which depicted three Catherine wheels. He also granted her a pension.

Hugh Swynford was recalled to France in 1371, where he died, although he was suffering from dystentry, it was rumoured at the time that he had been poisoned by John of Gaunt's servant, Nirac de Bayonne.

Some time after Blanche's death, but before John of Gaunt's second marriage, Katherine and John began an affair which was to endure as a lifelong relationship and resulted in four children, the Beaufort's, named after a castle in France belonging to Gaunt), being born out of wedlock to the couple:-

(1) John Beaufort, 1st Earl of Somerset (1373-1410) married Margaret Holland, the daughter of Thomas Holland, 2nd Earl of Kent, who was the son of Joan "the Fair Maid of Kent". The couple had six children. John became the ancestor of the Tudor dynasty. 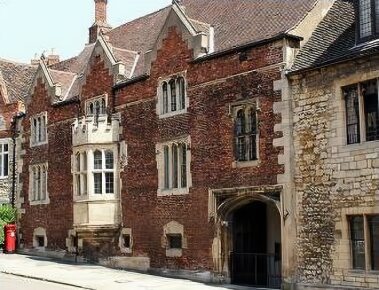 John contracted a political marriage with Constanza of Castile (1354 - 24 March 1394) the daughter of Peter the Cruel of Castille and María de Padilla. Constanza was a claimant of the Castilian throne. at Roquefort, near Bordeaux, in Guienne, on 21 September 1371, Katherine and John of Gaunt's affair ended in 1381 and Katherine returned to the manor at Kettlethorpe.

Constanza of Castille died at Leicester Castle on 24 March 1394 which affected a reconciliation between John and Katherine. 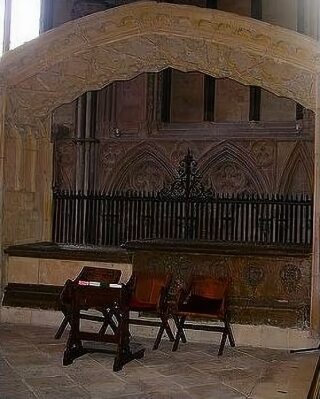 Two years later, Katherine and John of Gaunt were married on 13 January 1396 in Lincoln Cathedral by which Katherine became the Duchess of Lancaster and second lady in the land after the Queen. Records of their marriage kept in the Tower list: 'John of Ghaunt, Duke of Lancaster, married Katharine daughter of Guyon King of Armes in the time of K. Edward the 3, and Geffrey Chaucer her sister'. Their children were later legitimized by Gaunt's nephew Richard II and by the Pope, but were barred from inheriting the throne of England by a clause in the legitimation act inserted by their half-brother, King Henry IV.

John of Gaunt died three years later on 3 February 1399 and was buried beside his first wife, Blanche of Lancaster, in the choir of St Paul's Cathedral. After his uncle's death, Richard II confiscated the vast Lancastrian estates and Katherine went to live in Lincoln, in a house close to the east end of the Cathedral, her son, Henry Beaufort, had become Bishop of Lincoln shortly after his legitimation.


Katherine outlived John by four years, dying in her early fifties on 10 May 1403. Her tomb in the sanctuary of Lincoln Cathedral, which was shared with her daughter, Joan Beaufort, is covered by a a carved-stone canopy . Joan Beaufort's is the smaller tombs, both were once decorated with brass plates, full-length representations of both women, and small shields bearing coats of arms around the sides and on the top, but these were damaged or destroyed in 1644 during the English Civil War.