Thomas of Lancaster was the eldest son of Edmund Crouchback, 1st Earl of Lancaster and Blanche of Artois, the daughter of Count Robert I of Artois and Matilda of Brabant and a granddaughter of King Louis VIII of France. His father Edmund Crouchback was the younger son of King Henry III of England and Eleanor of Provence and brother of King Edward I. 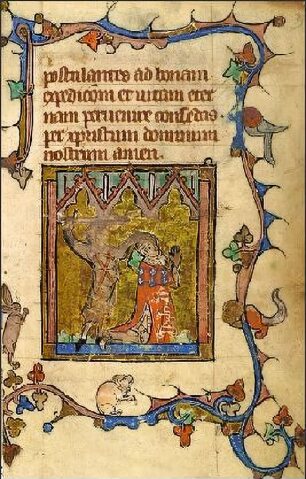 Thomas inherited the Earldoms of Lancaster, Leicester, and Derby when his father died in 1296 at the siege of Bordeaux. His marriage to the heiress Alice de Lacy, Countess of Lincoln, daughter of Henry de Lacy, 3rd Earl of Lincoln, brought him the further earldoms Lincoln, Salisbury, the barony of Halton and the lordship of Bowland in Lancashire. After his father's death he became a favorite of his uncle, Edward I, and accompanied him on several of his campaigns in Scotland.

Thomas attended the coronation of his cousin, King Edward II, on 25 February 1308, where he was given the role of carrying Curtana, the sword of St Edward the Confessor.


Unlike his father Edward I, Edward II proved to be a weak and unpopular king who was addicted to homo sexual favourites, which resulted in conflict between himself and his barons. He alienated the once loyal Lancaster, who hated Edward's favourite, the arrogant Piers Gaveston, who ridiculed him with the nicknames 'the Fiddler' and the 'churl', Lancaster swore revenge on him when Gaveston demanded that the King dismiss one of his retainers.

Lancaster became the leader of the barons in their resistance to the king, he was among the Lords Ordainers who demanded Gaveston's banishment and the establishment of a Baronial oligarchy. Unfortunately, the king soon after nullified the ordinances and recalled his favourite. Following a siege of Scarborough Castle, Gaveston was captured by the lords. Lancaster was one of the judges who convicted Gaveston and sentenced him to be executed in 1312. After the Battle of Bannockburn, where in 1314, Edward II was soundly defeated by Robert the Bruce, King of Scots, Lancaster, took advantage of the disaster to wrest control affairs from his cousin Edward. He attempted to govern for the next four years, but quarreled with the barons and failed to keep order.

Thomas divorced his wife Alice de Lacy, who was assisted in escaping from her husband by being abducted from her manor at Canford in Dorset by a knight in the service of John de Warenne, 7th Earl of Surrey, but retained her rich estates. This led to a bitter feud between Lancaster and Surrey, Thomas retaliated by seizing two of Surrey's castles. When the King intervened in their private war, the two settled into an uneasy truce.

In April 1318 the Scots took the English town of Berwick which led to a shaky reconciliation between Lancaster and his cousin Edward. The king, however, had not forgotten, or forgiven the death of Gaveston and seethed with resentment against his powerful cousin, stating "When this wretched business is over, we will turn our hands to other matters. For I have not forgotten the wrong that was done to my brother Piers". Together they besieged Berwick, but lack of co-operation between their troops led to the siege being abandoned. 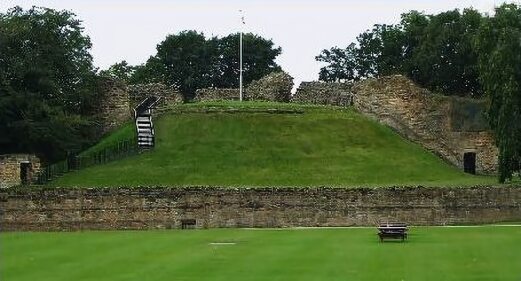 Edward soon acquired new favourites, Hugh le Despenser, 1st Earl of Winchester and his son Hugh the younger Despenser, whom he showered with gifts. The younger Despenser blamed Lancaster for the invasion by the Scots, whom he claimed to be in collusion with them. In 1321 Lancaster led a rebellion against the king. Edward cut off the army of his allies, the marcher lords and forced their surrender at Shrewsbury. He then led his troops to oppose Lancaster who was forced to fall back from Burton-on-Trent to his castle at Pontefract. Deserted by his troops he was defeated at the Battle of Boroughbridge, and surrendered to the king.

At a show trial conducted by his enemies the two Despensers, Edmund FitzAlan, 9th Earl of Arundel, King Edward and his half-brother, Edmund, Earl of Kent, he was not allowed the right to speak in his own defence, nor have anyone to speak for him and was found guilty of treason and sentenced to be executed. On 22nd March 1322 Lancaster was beheaded near Pontefract Castle.

After his demise Thomas' titles and estates were forfeited to the crown, but in 1323 his younger brother Henry of Lancaster successfully petitioned to take possession of the Earldom of Leicester. Although he had no legitimate heirs, Thomas left two illegitimate sons, one of whom was John of Lancaster, who became a scholar of theology.

Soon after Thomas' death, miracles were reported at his tomb at Pontefract, and he became venerated as a martyr. In 1327 the Commons petitioned King Edward III to ask for his canonisation, and pilgrims continued to flock to his tomb until the reformation.

In 1942 it was reported that some of Thomas's bones, dug up by workmen at Pontefract Castle, had been found in a box at Paskell's auctioneers in Colchester, Essex.

The British Museum holds a hoard of coins dating from the period, known as the Tutbury Hoard, it is the largest hoard ever discovered in Britain, with estimates varying from 100,000 to 300,000 coins, it was found in the Bed of the River Dove near Tutbury Castle in June 1831.

The hoard, which totals around 360,000 coins in all, includes coinage from England, Ireland, Scotland and from mainland Europe, dating from the thirteenth and fourteenth centuries, including coins from the reigns of Kings Henry III, Edward I, and Edward II of England and Alexander III of Scotland. It was hidden in the bank of the River Dove shortly after Thomas' defeat at the nearby Battle of Burton Bridge in 1322 and may well have belonged to him. Thomas was expecting reinforcements from his allies the Scots but when they failed to arrive he was forced to escape over the Dove.

The treasure was thought to have been meant to the be payment from Thomas Earl of Lancaster to his troops and Scottish allies, possibly to be taken to the Priory for safe keeping. Many witnesses confessed to seeing the casks but a wall of silence ensued.

The coins remained in the River Dove for five hundred years, the barrels breaking up until in 1831 they were discovered by workmen. The workmen found a few silver coins in the river bed gravel around sixty yards below the bridge. Throughout the week coins continued to turn up in ever increasing numbers. The next week, several thousand coins had been obtained from the bed of the river. The rest were believed to have been taken by local villagers directly after the discovery had been made.