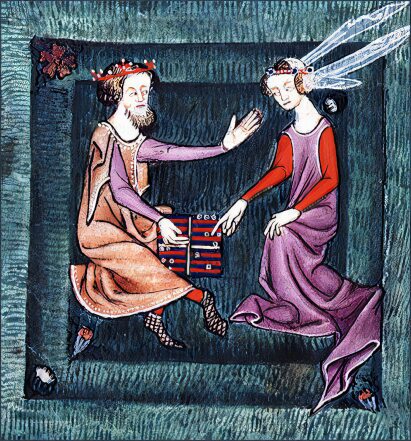 Ælfthryth, sometimes known as Elfrida, was the daughter of Ealdorman Ordgar of Devon and was born circa 945. Her mother was said to be a member of the royal House of Wessex. Her father Ealdorman Ordgar owned land in every parish from Exeter in Devon to Frome in Somerset. Ordgar was buried in Exeter and his son Ordwulf founded, or refounded, Tavistock Abbey.

Ælfthryth became the second wife of King Edgar the Peaceful, the great-grandson of Alfred the Great. According to Byrhtferth of Ramsey, she had first been married to Æthelwald,Ealdorman of East Anglia, the son of Æthelstan Half-King. William of Malmesbury tells us that the beauty of Ælfthryth was much admired and was reported to King Edgar. Edgar dispatched Æthewald to see Ælfthryth, ordering him "to offer her marriage (to Edgar) if her beauty were really equal to report."

However, Æthelwald instead married the lady himself and reported back to Edgar that she was quite unsuitable. Edgar when eventually informed of the truth, stated that he would visit Ælfthryth, the alarmed Æthelwald told his wife to make herself as unattractive as possible for the king's visit. Ælfthryth. however, did the opposite. Edgar was deeply impressed and had Æthelwald killed while hunting near present-day Longparish in Hampshire. The event was commemorated in 1825 by the erection of Dead Man's Plack, an inscription on the north side of the monument describes the circumstances of Athelwold's death.

Ælfthryth and Egar were married and she was crowned Queen on 11th May, 973, at Bath Abbey, which was the first instance of a coronation of a Saxon Queen of England. She was the first consort to be termed Queen since the infamous Judith, daughter of Charles the Bald, in the previous century.

Ælfthryth gave birth to a son who was named Edmund. In King Edgar's charter regranting privileges to New Minster, Winchester that same year, Edmund is termed "clito legitimus" (legitimate ætheling), and appears before the king's other, older son by a previous marriage, Edward in the list of witnesses. Edmund died young, circa 970, but in 968 Ælfthryth gave birth to a second son who was named Ethelred. 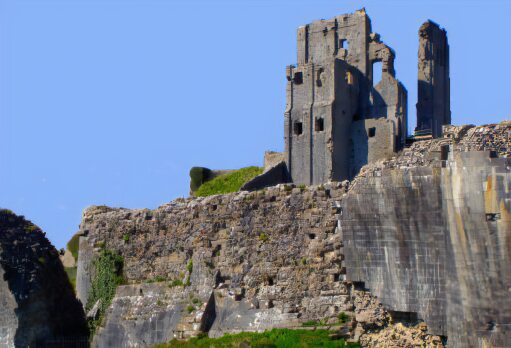 Edgar died in 975 leaving two young sons, Edward and Ethelred. His father's will named his elder son, Edward, as his heir and he had the support of the influential but now aged St. Dunstan, Archbishop of Canterbury. Due to the controversy about Aelfthryth's first husband, Æthelwald, Archbishop Dunstan accused Aelfthryth and Edgar of committing adultery, casting doubt on the young Ethelred's legitimacy. Many of the nobility of the realm, including the powerful Alfere, Ealdorman of Mercia were in favour of the seven year old Ethelred succeeding, as they themselves had much to gain from the crown being subjected to a long minority government. The nation was divided over the issue of which of his sons should suceed King Edgar. A meeting of the witan was arranged at Calne, in Wiltshire were the matter was debated at length. Eventually, the influence of Dunstan prevailed and accordingly Edward was elected King

Edward was crowned by St. Dunstan at Kingston upon Thames in 975, at the age of thirteen. After recording Edward's succession, the Anglo-Saxon Chronicle reports that a comet appeared, and that famine and "manifold disturbances" followed.

Despite what had passed, the two brothers, Ethelred and Edward, seem to have remained attached to each other. The now dowager Queen Ælfthryth, however, thoroughly detested her step-son and strongly wished her own son to succeed his father. At her instigation, a plot was hatched to murder the young King.

Edward visited his half-brother Ethelred at Corfe, in the Purbeck Hills of Dorset, probably at or near the mound on which the present ruins of Corfe Castle now stand. He arrived on the evening of 18 March 978, at the invitation of his step-mother. Ælfthryth treacherously met him at the door with a kiss of welcome. King Edward was then offered the traditional drink to refresh him. As the young King heartily quenched his thirst after the dusty journey, one of the Queen's attendants treacherously stabbed the sixteen year old in the back. Though severely wounded, he managed to spur his horse and escaped, making an attempt to re-join his companions, but died on the road. His bloody corpse, dragged in the stirrups by the terrified animal, revealed his fate to his attendants.

The Anglo-Saxon Chronicle relates: "This year was King Edward slain, at eventide, at Corfe-gate, on the fifteenth day before the calends of April (18th March). And he was buried at Wareham without any royal honour." The Anglo-Saxon Chronicle's account apportions no blame for Edward's killing. The earliest account of the murder appears in the 'Vita Sancti Oswaldi' (Life of St.Oswald), written circa 1000, and usually attributed to Byrhtferth of Ramsey. Edward is said to have been visiting his brother, Æthelred, and stepmother, Ælfthryth. A group of Æthelred's men met Edward, and, before he could dismount, stabbed him. There are no indications that anyone other than Ethelred's retainers were involved in the murder. In a sermon of 1014, Archbishop Wulfstan of York refers to the murder, but avoids naming those responsible: "They plotted against Edward and then killed and afterwards burnt him."

Edward was buried at Wareham and his murder went unpunished. Ælfthryth served as regent for her son during his minority until his coming of age in 984. Ethelred appears to have rebelled against his older advisers, preferring a group of younger nobility. His mother disappears from the list of charter witnesses from around 983 to 993, when she reappears in a lower position. She remained an important figure, being responsible for the care of Æthelred's children by his first wife, Ælfgifu. Ethelred's eldest son, Athelstan, prayed for the soul of the grandmother "who brought me up" in his will in 1014.Said to deeply repent the murder of Edward the Martyr, Queen Ælfthryth became a nun at her foundation of Wherwell Abbey in Hampshire and died there on 17 November 999, 1000 or 1001.